The legendary dressage horse Totilas has died at the age of 20 at his home near Frankfurt, Germany, following a severe colic attack. The Dutch Warmblood stallion was considered one of the most outstanding competitive dressage horses in the world and the first to score above 90 in dressage competition with his longtime rider, Edward Gal.

Together the pair held three world records and won three gold medals at the 2010 World Equestrian Games, as well as team and individual gold at the 2009 European Championships. The pair broke the world freestyle record at Olympia in 2009 with 92.3% ‒ a feat which stood for four years until bettered by Valegro and Charlotte Dujardin. Matthias Rath took over the ride in 2011 when owners Kees and Tosca Visser of Moorlands Stables sold Totilas to Paul Schockemöhle. Totilas was the top-scoring horse of the German silver team effort at the Euros that year, followed up with team bronze in 2015 in Aachen. Immediately afterward, the stallion was diagnosed with inflammation of the coronet band and was officially retired.

Totilas (Gribaldi x Glendale) became a sought-after sire and sired hundreds of foals in a stud career that began in 2010 when he was bred to 175 approved mares. Offspring of note include Glock’s Total U.S., Total Recall, Total Hope (out of Weihegold) Tolegro, and Glock’s Toto Jr. Total Recall set a new record at the foal auction in Vechta in 2012, selling for €200,000 euro. His son Toto Jr was the first to be licensed at Verden and was sold for €100,000 to Edward Gal’s sponsors, Glock. 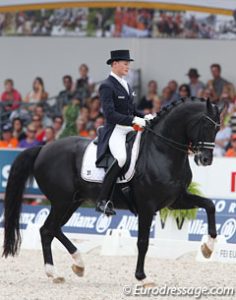 In Canada, dressage fans are familiar with the stallion Totem (Totilas x Donnerhall) a handsome eight-year-old chestnut gelding ridden by Karen Pavicic (CRO) and owned by Pavicic and Thomas Baur that has been scoring well at the Intermediate level. Jacquie Brooks’ rising star Te Amo (Theo) is by Totilas. Total Star, from Quebec breeder Estelle Motta of Stella Rossa Farm in Mirabel, was sold to Edward Gal as a four-year-old in 2018. There is even a jumper sired by Totilas with the intriguing name of Toronto Raptor competing in the 1.40m with a German rider.

With his amazing presence and extravagant movement, Totilas touched the hearts of people far beyond the sport of dressage. He spent his retirement years hacking out at Gestüt Schafhof and fulfilling his stud duties. A message from his former rider Edward Gal on the Glock Performance Center Instagram page reads:

Goodbye my friend
Heaven has a new star today.
But my heart is broken.
Rest in peace #Totilas.
You will always be remembered.
Together with you, I experienced happiness and even grief.
Time passed by and wounds healed.
But my love for you lasts forever.
You honored me with your trust.
You were my friend.
My condolences to Matthias and all who had the chance to work or live with this exceptional stallion.
And my thoughts to all of you who loved him.
Goodbye my friend.
I will miss you until we meet aga