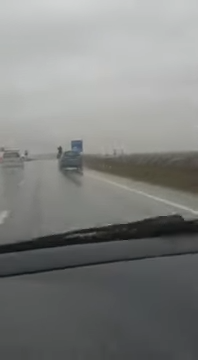 Ahead of them is a horse galloping along the side of the road as the lone rider apparently whips it with a T-shirt. According to local media, motorists were stunned by the mysterious lone rider galloping along the side of the road and reached for the phones to film the unusual scene. However, as the weather was rainy and causing difficult road conditions, many netizens criticized the cowboy as irresponsible as he could have caused an accident.

Reports said the cowboy was later spotted in a nearby town greeting pedestrians and allowing locals to stroke the horse. However, if the local authorities ever catch up with the galloping cowboy, he could face a fine of between GBP 228 and 508 as residents are not allowed to ride horses on major roads in the country and especially not on motorways. 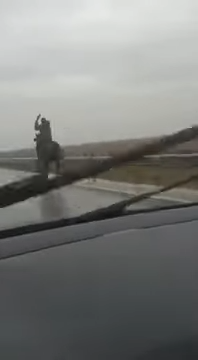 Fortunately, most drivers will reduce speed when they see horses near a road. But don’t assume that a motorist who slows has noticed you and your horse, or that he knows what to do once he does. Any well-trained horse can easily be spooked, and the most experienced rider/handler may have difficulty controlling the animal. Like most frightened animals, a horse may jump out on the road, which can cause a serious accident with oncoming traffic.